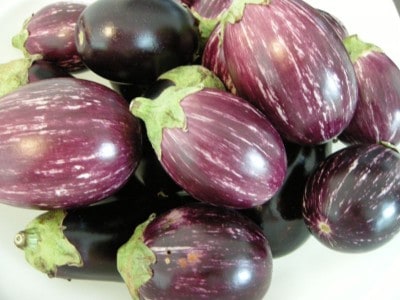 If you give a Belle an eggplant

She’ll probably look at you funny.

But she’ll take it just the same because a Belle hates to be rude.

She’ll turn it around and admire it’s color and shape…until you tell her it is a vegetable.

Once she realizes it is a vegetable..she’ll ooh and ahh…

Then, she’s gonna want to fry it. 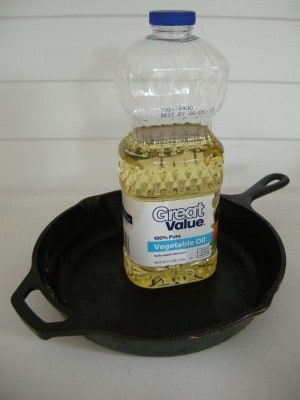 She’ll ask you for some oil and a skillet

You’ll get vegetable oil and your best cast iron…Seeing the cast iron will remind her of fried green tomatoes. 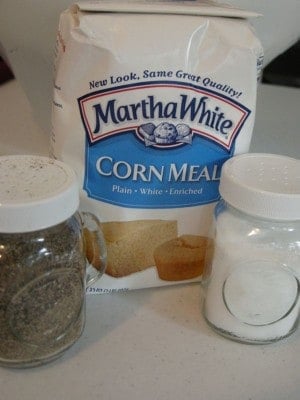 And a little salt and pepper. 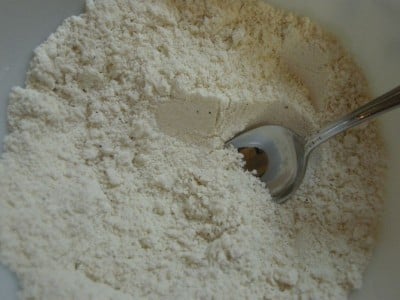 Once she has those, she’ll put them in a bowl and give them a good stir. Stirring them up will remind her of cooking with her grandmother when she was a girl and how her grandmother used to love a glass of cold buttermilk….

She’ll probably ask you for some. 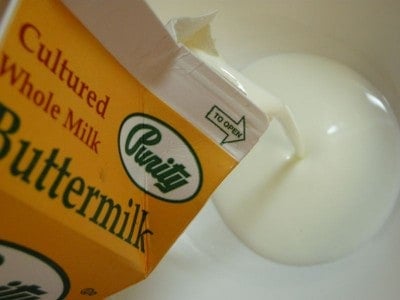 Once you get her the buttermilk, she’ll pour some in a bowl 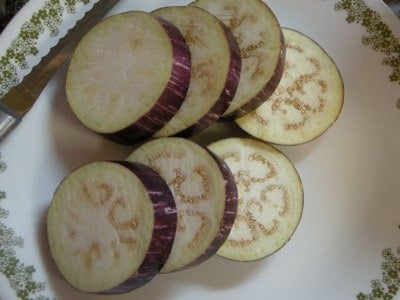 And carefully slice the eggplant…now it doesn’t look so strange to her anymore.

You’ll go to look for tea bags but discover that you’re out. You’ll have to go to the store. She’ll wanna to go with you.

At the store, She’ll smile and wave at everyone who glances your way. Being this sociable will make her lots of friends. She’ll start to worry that her new friends are hungry and invite them to eat with you.

One of the new friends will be from up north – that will make the Belle think of all they are missing out on. You’ll have to buy some Moon Pies, Pioneer Brand, Milo’s Tea, and pork skins so she can make them welcome baskets.

Once you get home, She’ll ask you to put the tea on while she gets back to cooking for everyone… 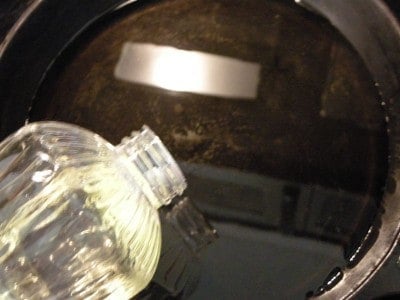 She’ll need to pour some oil in the skillet to heat.

Heating the skillet will make her think of summers in Alabama and fields full of blooming cotton.

She’ll get homesick and want you to sing Dixie.

Singing Dixie will take too long because she knows all the verses…the oil will start to smoke.

You’ll have to rush back to the kitchen. Rushing will make you hungrier and tummies will start to growl.

The Belle will remember her eggplant and go back to cooking. 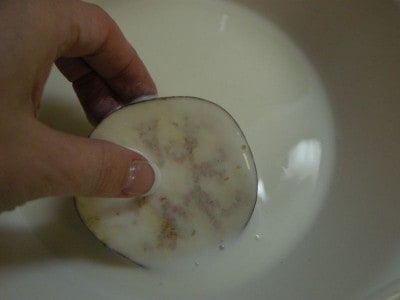 She’ll dip each slice in buttermilk 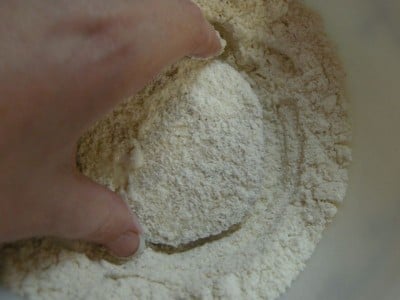 and then in the cornmeal mixture. 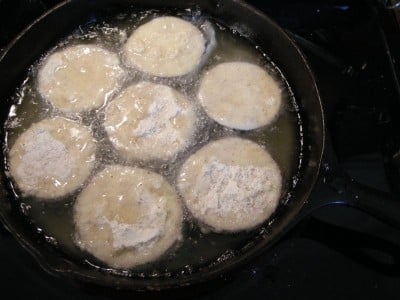 And place them in the oil. 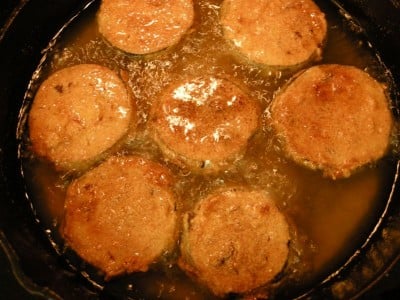 She will brown them up real good and make sure to turn them before they burn. 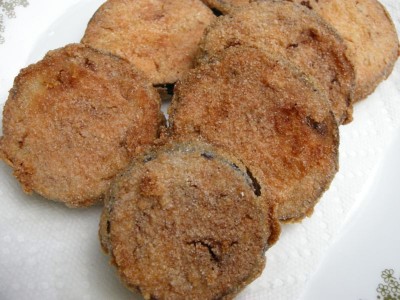 One they are browned on both sides, she’ll remove them to a paper towel lined plate.

Seeing the paper towels will remind the belle of how far we have all come and how fortunate we are to have such modern luxuries. She’ll want to sit down and give thanks before eating. 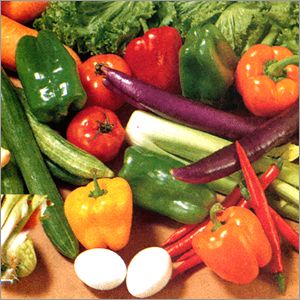 Once you are done eating, she’ll want to take the scraps outside to feed the critters, you’ll have to take her to the back yard.

While walking outside, she’ll pass your garden bursting forth with vegetables. Her eyes will get big as dollars and she’ll want to pick them.

you’ll get her a basket and tell her to help herself.

She’ll pick tomatoes first, then cucumbers, working her way down to zucchini…eventually, she’ll get to eggplants. 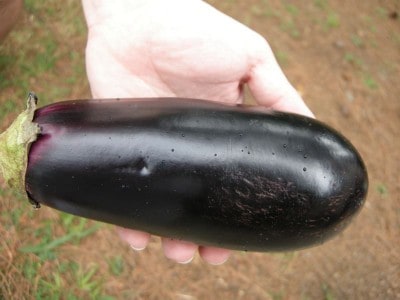 You’ll pick the biggest one and hand it to her with pride.

And chances are, if you give a Belle an eggplant,…

She’s gonna want to fry it. 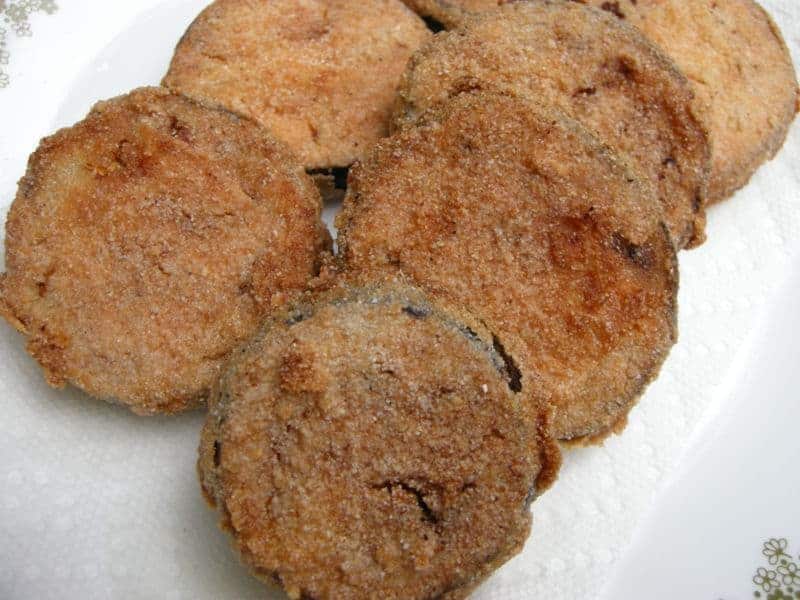 I have never tried eggplant before. This sounds good though. I love the books you are talking about!

I hope that you get the opportunity to try it soon!!

Never had fried eggplant before and this was SOOOOO! good. Wish there was a way to control the amount of oil absorbed by the eggplant. Will make again but only very, very rarely.

Oh but there is! The trick is to get your oil really hot before you start cooking. When oil is hot, it sears the outside and prevents most of it from being absorbed. If oil isn’t hot enough to immediately start sizzling and bubbling when you add your food, it languishes in there and the breading soaks it up while the oil gets to the cooking temp. That’s why food fried really well isn’t greasy but badly fried food is. Hope this helps!