Home » Side Dishes » How To Make Fried Green Tomatoes 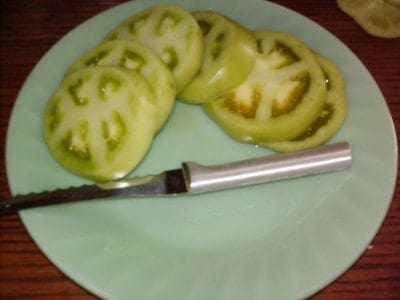 Back to beloved southern foods! This is the prime time of year for fried green tomatoes. All of our grocery stores sell green ones alongside the red for this very purpose (green tomatoes are like rocks so I can’t imagine them being used for anything else). Another weird cultural thing, but I imagine it stemmed from the whole “dang yankees trying to starve us” issue back in the days of old.

Did you know why turnip greens and field peas (black eyed peas) are so revered in the south? During the civil war, yankee troops confiscated anything that could possibly be used to feed their men as they traveled through the south. However, greens and field peas were considered only fit for animal fodder, so they were left. Being the food lovers that we are, those foods became something of delicacies for us and are absolutely required at every family table on New Years Day in order to bring luck and wealth in the new year.

Dumplings and biscuits came into play because even with money low, most families had flour. Flour was purchased in twenty five pound sacks, five times the normal sized bag we all get today. Therefore, it was usually about the only thing available to make a meal stretch. You can take a scrawny chicken, shred it and cook in broth with a big batch of dumplings and easily stretch the meal to feed even a large family. Biscuits are quick and easy to make and also very filling. Each of these meals would require little or no meat and leave the family full until the next mealtime.

Alright, enough of my cultural foods lesson, lets get on to tomatoes :). What you’ll need: A little flour (self rising or plain, doesn’t matter), corn meal, season all, and green tomatoes.Also oil for frying and a little milk for dredging. Slice your tomatoes kind of thick. (My mouth is starting to water..) Then take a picture of them with your fancy new tomato slicing knife that your mama got you for Christymas. (I meant to put the Y in there – if you ask I will explain:). I used about a cup and a half of corn meal. This isn’t one of those things that has to be precise but I’m estimating for those of you who really want measurements.

Add a little flour to it. This will act as sort of a “glue” to help hold it all together. I used a really large spoon although it looks normal sized in the pick. This was about four tablespoons of flour. Add enough season all to color your mixture.I used about two tablespoons. I know it seems like a lot but ….well just do it. If you don’t have season all you can season your meal by adding salt and pepper. Dip both sides of each slice into milk. Then dip into your meal mixture. Press down and coat both sides well. I used regular vegetable oil. You want it to come up about half way or so on the slices. Make sure you heat your oil well before you add the tomatoes. The key to having things that aren’t “greasy” is to heat the oil really well. That way, when you drop your food into it, the food is seared right off and then cooks from there. If your oil isn’t hot enough to do that, you basically end up soaking your breading in oil for a few minutes and it gets soggy and blah. My oil is just colored by the cornmeal in it at this point. It was clear to begin with. Brown each side well. I cook these on medium to medium high heat. Try not to turn them but once or twice as the coating is somewhat delicate and you don’t want that to come off. Drain your tomatoes on a paper towel lined plate. I even take another paper towel and blot the tops or turn them over onto it. Then you’re ready to go! These are delicious! They have a twang to them that ripened tomatoes don’t have.
If you try them, let me know what you think!
*We welcome your comments!*
Like This?
Share it!

Try soaking the green tomato slices in the buttermilk rather than dipping. I don’t know why, but to me, soaking a bit before frying just tastes better.